The Theatre on Chester, now in its 61st year, has gained a reputation for producing quality, affordable theatre for the community and in 2017 we present you with THREE plays for the price of TWO! It will also be a year of lighthearted plays: one Australian, one British and one American. By subscribing you will secure preferential seating, free programs and complimentary refreshments at intervals – all for only $60pp. The first 180 subscribers are invited to our February launch.

21st April – 13th May
By Nick Enright
Performance rights for Daylight Saving exclusively licenced by H.L.A Management Pty Ltd.
Directed by Vivien Wood
Felicity and Tom are a highly successful couple who have little time for their relationship because of their demanding careers. Intent on clinching a deal, Tom flies to LA and forgets their anniversary. As the clocks turn back for daylight saving, Felicity feels particularly lonely until she receives a surprise phone call from her first love. Will she be tempted by his charms? Daylight Saving is the winner of the 1990 Gold Awgie and Best Stage Play awards. Written by Nick Enright, one of Australia’s most loved playwrights, and set on Sydney’s North Shore, it is an amusing satire that examines attitudes to love and fidelity and will provide you with a few chuckles. 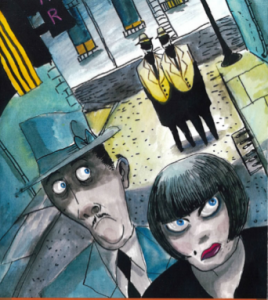 4th August – 26th August
By John Buchan & Patrick Barlow
By arrangement with ORIGINtm THEATRICAL on behalf of Samuel French Inc.
Directed by Carla Moore
Mix a Hitchcock masterpiece with a juicy spy novel, add a dash of Monty Python and you have the intriguing, thrilling, riotous and unmissable comedy. The show hurtles a notorious fugitive and a spellbound blonde from a London music hall north by northwest to Scotland’s most remote highlands. Will they save Britain from a den of devious spies? A cast of four actors plays over 150 characters in this fast-paced tale of an ordinary man on an extraordinarily entertaining adventure. The 39 Steps played for nine years on the West End, where it won the Olivier Award for best Comedy, and had sell-out productions around the world.

10th November – 2nd December
By Neil Simon
By arrangement with ORIGINtm THEATRICAL on behalf of Samuel French Inc.
Directed by Joy Sweeney
Rumors is a madcap, slamming door farce set in a large home located just outside of New York. The characters are arriving as guests at a 10th anniversary Dinner. The ﬁrst couple to arrive discovers that one of their hosts, Charley, has unsuccessfully shot himself. Charley’s wife is nowhere to be found and neither are the servants. As more guests arrive, there are cover-ups, deceptions, mistaken identities, and a lot of huge laughs. Neil Simon is an American playwright, screenwriter and author. He has written more than thirty plays and nearly the same number of movie screenplays. He has received more combined Oscar and Tony nominations than any other playwright.